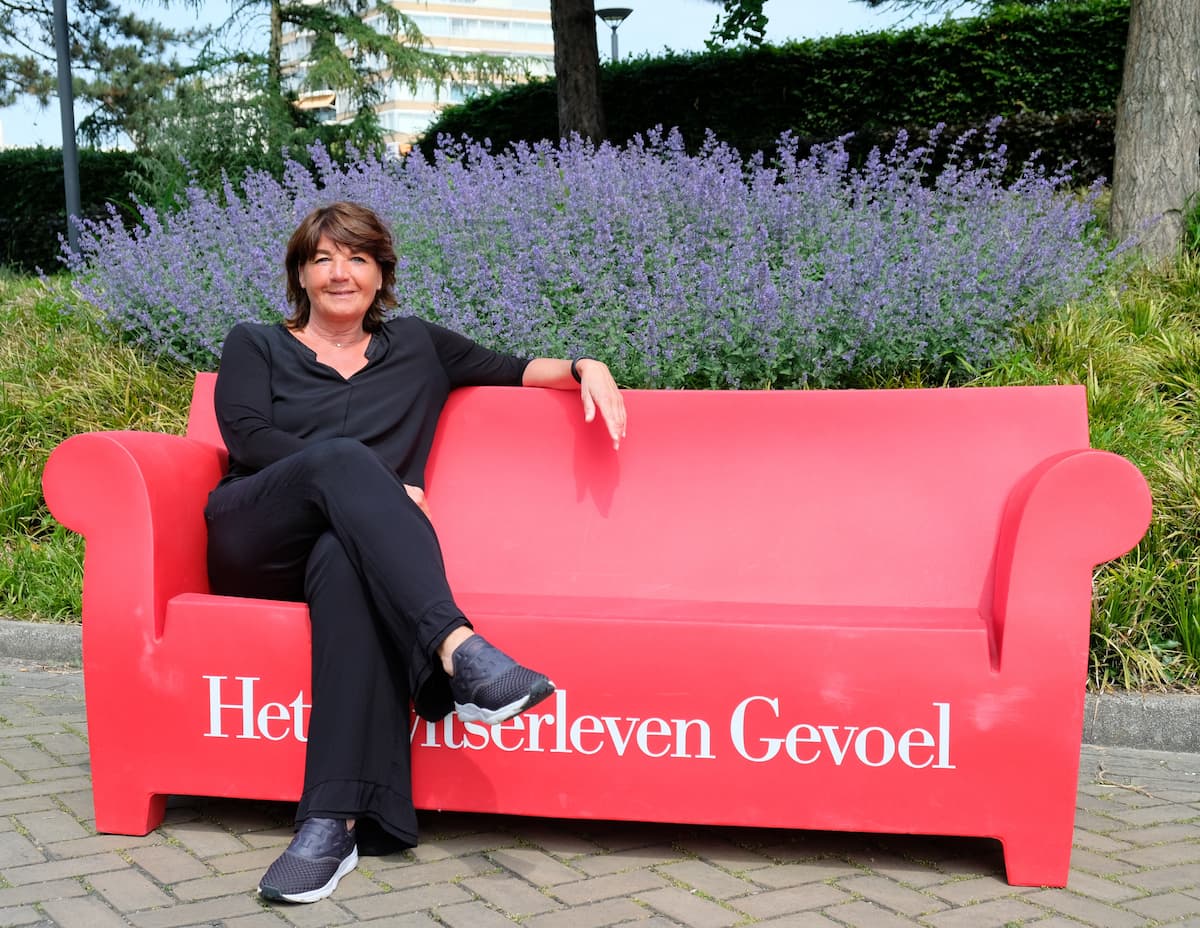 Zwitserleven is celebrating its 120th anniversary this year and we at parent company Athora Netherlands are very proud of that. Brand manager Ilse van de Gaag has been involved with the brand for 35 (!) years and is one of the founders of the Zwitserleven feeling, a concept that has even been included in the Van Dale dictionary. We ask Ilse how she has spent all those years building 'her' brand and how she views the future with the new shareholder Athora.

In 1985 Ilse got a vacation job at Zwitserleven, which at the time was still located on the Apollolaan in Amsterdam. "The letterhead at the time still read 'Swiss Life Insurance and Annuity Company' and I thought it was a dull affair, very formal too. But the fact that I, as an Amstelveen native, had my heart on my sleeve appealed to the advertising and marketing manager at the time and he asked if I wanted to come and work for him," says Ilse. And the rest is history...

Ilse could not have imagined then that today she has been responsible for building the brand for 35 years. Thanks to her, everyone in the Netherlands has a longing for the Zwitserleven feeling: swaying palms, a hammock with a drink, distant travels or just enjoying it close to home with your loved ones. "The great thing is that everyone has their own interpretation of the Zwitserleven feeling," says Ilse. "What we want to convey above all is the feeling of freedom to be able to enjoy life carefree if you have arranged your financial future well."

Zwitserleven was therefore the first provider in the Netherlands to link retirement with enjoying life and something desirable. Prior to that, communication about this phase of life had a much more worrying undertone. Ilse was one of the initiators of this change in thinking about pensions. "What I find special is that a lot of people catch on to the Zwitserleven Feeling. But when it comes to pensions, people tend to stop thinking about it. Retirement is not seen as a basic necessity of life and many people don't even know that they work one day a week for their pension pot. We are not Nike or Coca-Cola, but a low interest product. The fact that the Zwitserleven Feeling is in the dictionary after all fills me with appropriate pride. By loading the concept consistently year after year, more and more people get used to it."

"What we want to radiate above all is the feeling of freedom to be able to enjoy a carefree life if you have arranged your financial future well."

A good brand story must be consistent, but it must also match a company's DNA, Ilse explains. "Only then can you successfully build a brand. I like the fact that - when we started - we were a mutual insurer, where the members shared risks and profits with each other. A better pension for the same money', was the motto at the time. And you can still see that sympathetic essence in the core values of our company and in our communication. We have always been an odd man out and not an unwieldy insurer and that appealed to people. We think differently, have a personal approach, are sympathetic and have a lot of expertise. Furthermore, we are truly distinctive in terms of sustainability. The pursuit of a beautiful world and thinking about the future is also reflected in this. And that is certainly not a marketing driven story, but a solid substantive approach."

Ilse can hardly remember all she has done over the years to bring Zwitserleven to the people. This is, of course, a fraction of the many actions, which Ilse has launched over the past 35 years to put the brand on the map. "We have always tried to present ourselves in a distinctive way and tried to make retirement a bit hip. We were unknown in the region in the beginning and set up shop windows at advisers with beautiful promotional material. This created a lot of goodwill. We also sponsored the cycling tour of the Netherlands and the Tour of Texel. We were also one of the first to advertise on billboards, with advertising on bus shelters and a stickered streetcar. Now that sounds very obvious, but back then that was really progressive for a pension insurer."

And then, of course, there were the successful TV commercials that are engraved in our collective memory. Kees Brusse with his humor, Huub Stapel and Ellen ten Damme on the beach and currently Chris Zegers; they and many other celebrities brought the Zwitserleven Feeling into Dutch living rooms in recent years. "In this, too, we have always moved with the spirit of the times. When Kees Brusse started to get old and we had to look for a replacement, we deliberately chose a man and a woman as new faces. That's how Huub and Ellen came into the picture. They too have done fantastic work for our brand for ten years."

With the arrival of the new shareholder Athora, the focus of the entire company has shifted to good, affordable and sustainable pension provision. In addition to a glorious history, there is also a bright future ahead for the Zwitserleven brand. "From the basis of collective pensions in the early days, we have focused on all kinds of other things over the years and were even all-round insurers for a while. Now we are back to the basics, which is how we became big and I like that. The more focus you have as a company, the better it is. With the upcoming pension agreement, a retreating government and other changing market conditions, I see plenty of starting points for how we as a pension insurer can respond to changing needs in society."

Due to the well-known circumstances, the festivities surrounding Zwitserleven's 120th anniversary are a bit more subdued than Ilse would have liked. But the special anniversary year will certainly not go unnoticed. "Through social media you can expect a fun promotion soon, in which you can win a dinner with female star chef Margo Reuten. Anyone driving along the A9 may already have seen the anniversary banner. For colleagues at Athora we are organizing an online pension quiz to celebrate 120 years of Zwitserleven. In addition, larger customers, employers and advisors can expect a visit from our 'pension bus' in the near future. We would also like to eat cake with them and toast our 120th anniversary. Because without them, we could never be successful."